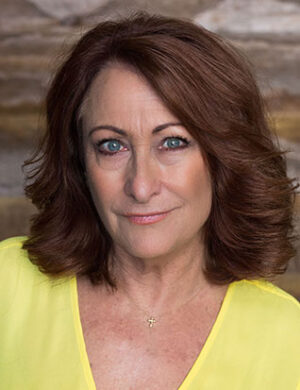 For more than 30 years, Lynne McGranger has appeared in Channel 7’s long running serial, Home & Away, as the irascible ‘Irene Roberts”. In 2014 she was acknowledged as a TV actor legend when she became the longest serving female cast member of any Australian TV show. 2019 saw Lynne star alongside some of Australia’s favourite leading ladies in the one off special, ‘Ladies Night’. In 2020 she put her time in covid-lockdown to good use, penning her first memoir, ‘Acting Up’, which was published and released by Echo Publishing in late 2021.

Born and bred in Sydney, Lynne graduated as a primary school teacher from the Riverina College of Advanced Education in 1975, and as fate would have it, also won the Best Actress award at the college Drama Festival that same year. She taught for several years afterwards but it was only a matter of time before she decided to follow her true passion of acting.

Before joining H&A full time in 1993 Lynne had written, choreographed and performed in numerous productions, from comedy and drama to cabaret and musicals, both on television and on stages across Australia. In 1989 she performed with “The Natural Normans” at the Edinburgh Fringe in the Perrier Award nominated “Dog’s Breakfast”.

Lynne was runner up on the 14th season of Dancing with the Stars which aired on the 7 Network. Lynne was also a regular guest host on The Daily Edition on the Seven network. She has received critical acclaim for her stage roles in Harold Pinter’s “The Lover” and “Honey”, an award winning play based on Bryce Courtney’s Smokey Joe’s Cafe. Most years at Christmas, Lynne travels to England to perform in pantomime.

Lynne’s online following has seen her front campaigns and activations for brands such as Hello Fresh (in which Lynne and Johnny Ruffo filmed episodes of themselves cooking dinner with families around Australia), Black Pepper Clothing, Australian Hearing Week, Optus and 20th Century Fox.