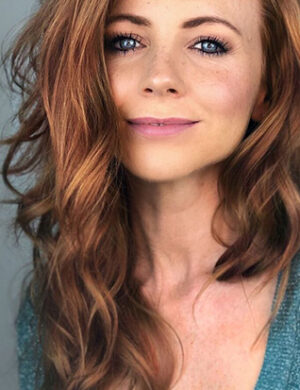 Lynn Gilmartin is an Irish-born Australian who has been globetrotting since 2009, immersing herself in the poker world as a player, television presenter and producer. Lynn has travelled through more than 30 countries, over 100 cities within them, and has plenty more to add to that impressive passport-stamp collection as the anchor of the World Poker Tour on FOX Sports (US), reaching approximately one million viewers per week.

Lynn has also added to her impressive array of credits in 2021 with the role of The Pirate Queen in Dive Club (Ten/ Netflix). In 2020 she played one of the leads, Gem in the feature A Little Bit of Love which has been theatrically released in Australia and internationally on Netflix, Gabby in the feature film Kidnapped and she also shot a recurring role in Neighbours.

A certified holistic health coach, Lynn shares her discoveries around living a healthy lifestyle, along with her travel adventures at LynnGilmartin.com.

Me and @lawrence_pola finding out @thislittleloveofmine.movie has spent TWO WEEKS in @netflix’s global top 10!!! 🚀 Have you seen it? Thank you so much to those of you who have! 🙌 ...

🥰 Bodhi Ángel Guillén 🥰
Our boy is earth side!!! His long-awaited birthday finally came on July 8th, 2021, weighing 4.15kg (9lb 2oz). We feel like we’re dazed in a dream, all blissed out and stripped raw with our love for this tiny creature. Bodhi, our little wisdom tree. 💚🌳 ...