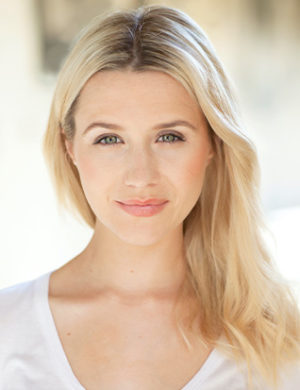 Genevieve is an Offie nominated actress who has recently returned to Australia after studying and performing in London. Genevieve’s recent credits include playing Aphrodite in the world premiere of Mythic (Charing Cross Theatre) for which she was nominated for an Offie Award for Best Supporting Actress in a Musical and appears on the Original London Cast Recording, feature film The Spy Who Dumped Me (Lionsgate) with scenes opposite Mila Kunis & Kate McKinnon, Nina in short film Oblivious and workshop performances of Steven Sater’s new musical Murder at The Gates (The Other Palace). Genevieve also appears in commercials for Cadbury and Amazon Echo.

In 2016, Genevieve graduated with a Master of Performance in Musical Theatre from the Royal Academy of Music in London. During her studies she appeared as Johanna in Sweeney Todd at the Theatre Royal Stratford East and April in Company.

A diverse performer, Genevieve also graduated with a Bachelor of Laws from the University of Notre Dame (Australia) and was admitted as a solicitor to the Supreme Court of Western Australia.