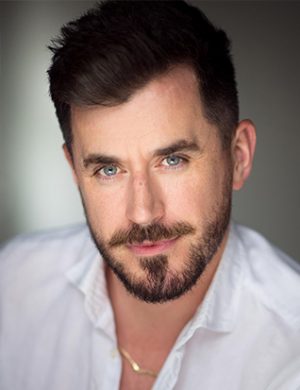 Bobby Fox is an Irish born Australian actor who originated the role of Franki Valli in the Australian production of Jersey Boys which he performed over 850 times. He is a 4 times World Irish Dance Champion and toured with dance productions Riverdance, Dancing on Dangerous Ground, To Dance on the Moon and starred in the revival of Australian musical Hot Shoe Shuffle as Spring. On stage Bobby has had lead roles in Blood Brothers, Mamma Mia!, Leader of the Pack, Dusty – The Original Pop Diva, We Will Rock You, Spamalot and The Production Company’s Oklahoma, Sweet Charity and Damn Yankees. In 2016 and 2017 he appeared in Ladies in Black which toured nationally and for which he received a Green Room Award nomination. Later in 2017 he performed in Assassins at The Hayes Theatre and he received a Helpmann Award nomination.

Onscreen Bobby’s credits include Upper Middle Bogan, It’s a Date, Tricky Business and Househusbands. He also appeared in the feature film The Cup.

Bobby performed as a star vocalist in Saturday Night Fever’s Sydney season for GFO in 2019 before debuting The Irish Boy to sell out shows at The Sydney Opera House and The Adelaide Cabaret Festival in June 2019. Later that year he supported the incomparable Michael Feinstein at The Sydney Opera House and Melbourne’s Hamer Hall before debuting in Ch 9 ‘s Carols by Candlelight.