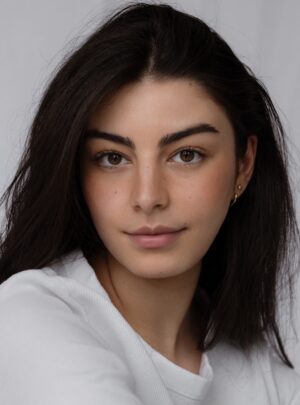 Melbourne born and bred, Tayla comes from a family of migrants and is incredibly proud of her roots – knowing she owes much of her experience and opportunity to her family.

Graduating from Caulfield Grammar School in 2013 where Tayla was awarded the state’s Performing Arts Scholarship, she went on to feature as a lead in Chris Lilley’s internationally acclaimed J’amie Private School Girl, as well as lead roles in multiple TVC’s for: Victoria University, Target, The Transport Accident Commission (TAC) and a supporting role in the Logie-winning television series, Nowhere Boys.

Completing her Bachelor of Communications at Deakin University, Tayla went on to pursue a career in Public Relations and after spending four years in the corporate world, gaining extensive experience in communications, Tayla has rediscovered her love for acting and is currently playing the recurring role of Constable Eliz Arkin in Neighbours.

Having begun training with the Children’s Performing Company of Australia and Victorian Youth Theatre at the age of six, Tayla’s passion for acting started early on. With over 15 years musical theatre and acting experience, Tayla is equipped with a wide range of styles and skills.