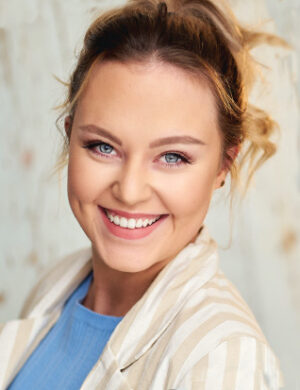 Tayla Coad is a 2019 graduate of the Victorian College of the Arts (Music Theatre)  Tayla’s love for performance started whilst playing a bumble bee in her first dance concert at the age of two, which remains the favourite role she’s ever played.

After competing in dance nationally and internationally, Tayla pursued her love for music theatre and moved to Melbourne to further her studies at the VCA

During her time at the VCA she was given the opportunity to play Maggie in Flora: The Red Menace (dir. Jason Langley) and Ensemble/Ivy Smith cover in On The Town (dir. Adam Mitchell)  Tayla also studied in New York City as part of the Global Atelier subject.

Before she even had time to graduate in 2019 , Tayla was given the opportunity to work with Michael Ralph where she made her debut in Legally Blonde the Musical (James Terry Collective) as Margot and during rehearsal, found out that she had successfully gained the role of Sandy in Grease (Royal Caribbean Cruise Lines ) in which she was starring before COVID intervened and she returned home from the Caribbean in March 2020.