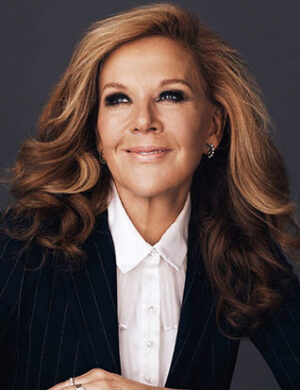 From Sydney to London’s West End to the depths of the South African jungle, Rhonda Burchmore has endeared herself into the hearts of all Australians.

With a smile that could light up the Sydney Opera House and a career spanning over 35 years, this vivacious, flame-haired beauty continues to turn heads wherever she goes and draw thunderous applause wherever she performs.

She has forged a lengthy career in one of the toughest and most unforgiving industries, show business, yet as critics attest, she just keeps going from strength to strength.

Few Australian entertainers have shared her status and immense popularity amongst her peers, who admire Rhonda for her big personality, big heart and enormous capacity to give back to the industry that has shaped her career.

Highlights of Rhonda Burchmore’s illustrious career include performing on London’s West End in Sugar Babies featuring Mickey Rooney and Ann Miller, Stop The World I Want To Get Off with Anthony Newley, starring opposite David Atkins in the original Hot Shoe Shuffle and opening Crown Casino with her cabaret spectacular Red, Hot & Rhonda – playing to over 60,000 people.

In 2016 Rhonda co-produced and starred in the outrageous TWINS with Trevor Ashley; which after a sell-out premiere season at the Melbourne International Comedy Festival, headlined the Adelaide Cabaret Festival the same year. In 2017 Rhonda produced, co-wrote and starred in ABBA-solutely Fabulous with best friend Lara Mulcahy, which continues to play sell out engagements across the country. The two dynamos returned in 2019 with a new Rhonda Burchmore Production Partners in Crime.

In 2020, Rhonda appeared on I’m a Celebrity Get Me Out of Here, winning the hearts of Australians and placing third. Later in the year, Rhonda will debut a lead recurring role in Channel Seven’s sitcom Fam Time. Rhonda’s other television credits include regular performances on long running variety shows Hey Hey It’s Saturday, The Don Lane Show, The Mike Walsh Show, The Midday Show, Good Morning Australia with Bert Newtown, Spicks and Specks and Carols by Candlelight. Rhonda has also appeared as a featured guest on Kath & Kim and more recently on Nine Network’s Love Child. Rhonda is also a regular panellist on Studio Ten and is a familiar face across Australian morning television. Rhonda made her film debut in the role of Kate in The Pirate Movie and more recently as Cheryl in The Wedding Party.

In 2014 Rhonda was awarded the OAM for her service to the performing arts and community.

In 2014 Rhonda won the Cabaret Icon Award at the International Adelaide Cabaret Festival.

In 2002 and 2012 Rhonda won Female Vocal Performer of The Year at the MO Awards and ACE Awards.

In 2011, Rhonda released her auto-biography Legs 11: My Life in Front of the Lights and Backstage, with New Holland Publishing. It’s substantial success resulted in a 2018 re-release with additional chapters.

Rhonda has recorded five albums including Pure Imagination, Midnight Rendezvous, Live At The Melbourne Concert Hall and Cry Me A River – The World of Julie London with ABC Records.

Pumped to performing the National Anthem tomorrow before a sell-out crowd at
Fannie Bay @darwinturfclub 💕🙏 #rehearsal 💝 ...

With my best girl @lexiela at the @darwinturfclub Gala Ball 💕 ...

Sunset in Darwin -wishing love and sunshine to everyone during these deeply troubling times 💕🙏- especially all my friends in NSW & all my colleagues in the Arts - my heart breaks- but we will get through this together 💕🙏💔 ...