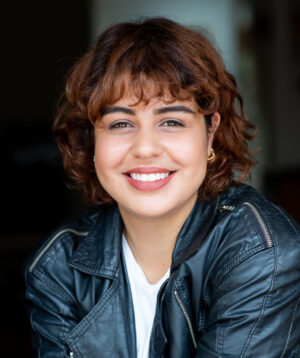 Natali Caro (she/they) is a queer, first generation Chilean & Colombian actor, comedian, singer, writer, and drag king. Natali has always had an affinity with the arts and commenced singing, dancing and acting lessons from a young age. In 2021 she was shortlisted for the ATYP Rebel Wilson Comedy Commission and nominated as Best Artist in FBi Radio’s Sydney Music, Art & Culture Awards. They also starred in the original drag king musical All The King’s Hens which toured in Sydney and Melbourne (for Giant Dwarf and Comedy Republic). Her debut solo comedy show, Seeking Representation (Giant Dwarf 2020 & 2021) sold out twice and got a standing ovation at each performance and is set to return this Sydney Comedy Festival. Last year she also featured on SBS The Feed and The Chaser’s War on 2020.

Natali is coming off the back of devised sketch comedy show Mystery Flight, produced by Century Venues (The Comedy Store and Factory Theatre), as well as the lead in Taz VS The Pleb, by Kasia Vickery, produced by Rogue Projects (Flightpath Theatre).

Natali is passionate about comedy and original perspectives that shed light on queer, trans, people of colour. She is a strong advocate for intersectional representation in Australian Film, Television and Theatre, and making opportunities more accessible to the disadvantaged majority.

Error: There is no connected account for the user nati_daddy_.