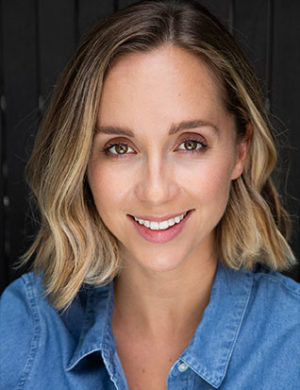 Nadia Komazec was born to entertain and she began training at her mother’s dance studio as soon as she could walk. She made her professional debut in 2006 as Meg Giry in the Australasian touring production of The Phantom of the Opera (RUG). Shortly after she then completed the 10th Anniversary tour of Mamma Mia! as U/S Sophie.

In 2017 Nadia was cast as Columbia in The Rocky Horror Show (GFO/GWB) which toured nationally into 2018. In between seasons of The Rocky Horror Show Nadia also landed the lead role of Campbell in Stage Master’s Bring It On the musical. Nadia then played Patti di Marco on an International Tour of The School of Rock (GWB) in Australia, China and New Zealand in 2019 and 2020 which ended thanks to COVID arriving.

In 2021 and 2022, Nadia has been wowing audiences as the vivacious Holly in The Wedding Singer (Dir. Alister Smith, choreographer Michael Ralph) which has toured nationally.

On screen Nadia appeared in ABC3’s Season 2 of Dance Academy.

Nadia is an extremely versatile and experienced live performer and is looking to build on her screen opportunities.

“Komazec has deft comic timing and sings the crap out of the material.”
(Arts Hub)