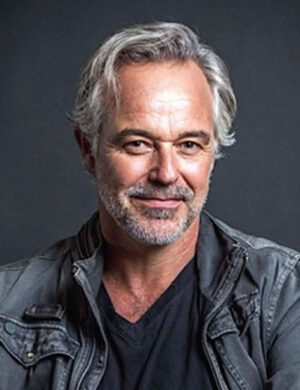 Cameron Daddo began his multi-award winning career in entertainment over 30 years ago.

He has covered just about every angle… acting, producing, directing for film & television through to musical theatre. He is also a published singer/songwriter, magazine columnist and has credits as a television host and radio announcer.

Cameron kicked off his performing career as a model at the age of 18 and went on to host children’s television “The Dish” and “The Cameron Daddo Show”.  He moved into prime time TV to host “Perfect Match” and onto stage with productions including the lead in “Big River” and the Scarecrow in  “Wizard of Oz”. After marrying model Alison Brahe they moved to Los Angeles in ’92 and appeared in many top rating television shows, including all of the CSI’s and NCSI’s, the Mentalist, he featured as the Vice President in a season of 24 and played the President in the hit series, Nikita.

Now living in Sydney, Cameron previously worked between the US and Australia.  His local stage credits include Captain Von Trapp in The Sound of Music, Narrator for The Rocky Horror Show,  Legally Blonde and TV drama performances including Beaconsfield, and series regular Adam Goodman in Packed to the Rafters.  In 2020 Cameron makes an appearance on Home and Away, and continues the success of his popular podcast he records with his wife Ali; Separate Bathrooms. You can be hear Cameron 7nights a week on his number 1 rating national Smooth FM radio show.

How do you play, what do you play with?? Play helps shake the worries and stress out of our lives. Lego? Wood, hammers, and saws? A garden patch? A big ol’ bed?? Check out these guys and get playin! ❤️❤️❤️Thankyou @maddytyers and @jimmyjameseaton for joining us in “The Bathroom” for a lovely chat. Link in my bio for more🥰. *******************************************Maddy and Jimmy met when they were both working at the Starlight Foundation
They bonded over their shared love of LEGO and soon they were engaged complete with a LEGO themed wedding.
The pair appeared on the first season of LEGO Masters in 2019
The Brunswick duo live and breathe creativity in their daily lives from their YouTube channel, to their show at this year’s Melbourne Comedy Festival The Brick of Destiny
Maddy recently wrote a book about her experience with an eating disorder in her book titled, When Anna Came To Stay aimed at children aged 6-12, teachers and medical professionals
Maddy has had numerous roles on Australian TV including, Neighbours, Back In Very Small Business and City Homicide but is best known for her supporting lead role as Amanda Tucci in the hit kid’s TV series, The Elephant Princess. @novapodcastsofficial @alidaddo ...