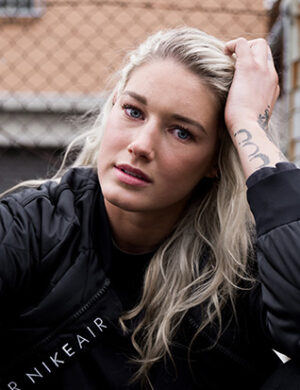 Tayla Harris is an Australian Rules Football Player and boxer, who grew up in Brisbane’s northern suburbs. She was an inaugural marquee player for the Brisbane Lions in 2017, but opted to request a trade at the inaugural seasons end and now plays for the Carlton Football Club. Harris received All Australian honours in 2017 and 2018, whilst winning mark of the year in seasons 2018 and 2019.

Harris is well known for making headlines in 2019 after she become the victim of online trolling from a picture taken by AFL Media photographer Michael Wilson, which was posted by the Seven Network.