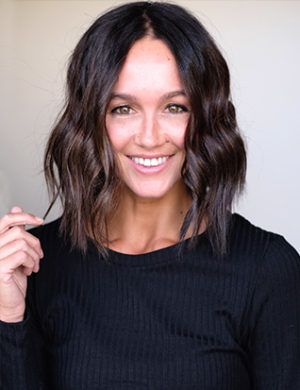 Sharni Vinson was born in NSW, Australia and grew up in Sydney’s southern beach superb of Cronulla. As a 3rd generation performer in her family, Sharni began singing, dancing, and acting at a young age. Co-raised by her single mother and grandparents, she inherited their musical gene and fell in love with the entertainment industry, and by the age of 12 she had enrolled in the Brent Street School of Performing Arts. As a teenager, Sharni also trained and competed at a National Level in swimming, holding 4 State records throughout high school.

By the age of 17, Sharni landed her first major recording contract, and signed to Roadshow Music Australia as a member of female pop group, “Foxfire IV”. Their debut single ‘Roses’ reached the top 50 on Australia’s ARIA’s charts, and shot to #3 on the Top 40 Countdown Australia.

In 2004, after two previous appearances on the show, Vinson was asked to join the regular cast of Australia’s #1 television drama, ‘Home and Away’. Her performance as ‘Cassie Turner’ in the long running series earned her a nomination for ‘Most Popular New Talent’ at the TV Week Logie Awards in 2006. After 3 years on the show, Sharni announced she would be leaving the series to pursue a career in America.

In January 2008, Sharni moved to Los Angeles, where within just a few days she was chosen by the ‘king of pilot tv’, director David Nutter (Smallville, Supernatural), to appear in the $50M LG ‘Scarlet’ TV series advertisement campaign, shot in Bangkok,Thailand. From there, Vinson booked continuous guest roles on shows such as ‘CSI:NY’, ‘NCIS’, ‘My Boys’, ‘Cold Case’, and the CW pilot, ‘Austin Golden Hour’. That same year, Sharni also secured herself the lead role in the pilot presentation, ‘The Depths’, produced by “Baywatch” creator, ‘Gregory J Bonann’.

In 2009, after an extensive search for a leading lady with amazing dance capabilities, Vinson booked the coveted lead role of ‘Natalie’ in Disney’s “Step Up 3D”. For the third instalment in the ‘Step Up’ dance film franchise, Vinson endured a physically demanding 5 month ‘boot camp’, training in NYC in parkour, capoeira, weights and lengthy dance rehearsals. The ‘Step Up’ movies have since become the most successful series of dance films in the world. Of all 5 films in the franchise, ‘Step Up 3D’ remains the most successful film to date, grossing over $240M worldwide since it’s 2010 release.

In 2010, Vinson was asked to join the cast of the Universal Studios feature film, ‘Blue Crush 2’. The sequel to the original surf flick, ‘Blue Crush’, demanded an actress highly accomplished in water skills and after her audition, the role of pro-surfer ‘Tara’ was later written in to add Vinson to the film. Filmed in Durban in South Africa’s shark infested waters, Sharni displayed her ocean savvy skills in a vigorous surf camp where she learned the ambidextrous skills of surfing.

In 2011, Sharni headed back to her home country to join the Australian/Chinese co-produced shark thriller ‘BAIT 3D’, written by Russell Mulcahy (Resident Evil- Extinction). The film was renamed ‘Shark 3D’ for Chinese audiences, which went on to literally take a bite out of the Chinese box office, opening at #1 and grossing over $25M in its first 3 weeks in theatres. Vinson was the only cast member sent to China to shoot additional footage and promote the film for the Chinese release.

Perhaps Vinson’s most critically acclaimed role to date is as ‘Erin’, the perfect blend of girl next door meets action survivalist, in home invasion horror film, ‘You’re Next’. It was after seeing Vinson that screenwriter Simon Barrett quickly adapted the character to suit the actresses tough native Australian background. The film’s premiere screening at TIFF in 2011 resulted in an immediate bidding war which eventually saw ‘Lionsgate’ win the battle to acquire the film. Word of mouth by horror fans built a buzz throughout the industry, and after a long awaited release, the film opened theatrically in 2013 to overwhelming success. ‘You’re Next’ has across the board been named one f the best horror movies of all time, earning Vinson multiple awards and the title of America’s newest “Scream Queen”. In 2013, the New York Times stated that “Vinson’s is a career that keeps evolving”, and that “you can definitely see the birth of an action heroine in her ‘You’re Next’ role”.

In 2012, Sharni led the way in ‘PATRICK’, the remake of an Australian cult classic, originally released in 1978. In the film, Sharni plays the lead role opposite Charles Dance (Game of Thrones) and Rachel Griffiths (Six Feet Under). Again, Sharni earned critical acclaim for her portrayal of ‘Nurse Kathy’ and in 2014, the Australian Film Critics Association nominated her performance for ‘Best Actress’ at the AFCA Awards, in the company of Nicole Kidman and Naomi Watts.

In 2014, Sharni was asked to join Jackie Chan in his latest action adventure epic, “Dragon Blade”, opposite John Cusack (Being John Malkovich) and Adrien Brody (The Pianist). In the film, Sharni plays the Queen of the Roman Empire in the days of early war on the Silk Road. ‘Dragon Blade’ released in February 2015, breaking all records at the Chinese box office, and later becoming the highest grossing film in Chinese history.

In 2015, Forbes cited ‘You’re Next’ as being “the best slasher movie since 1992’s ‘Candyman'”, stating that Vinson’s “shocking facility with self defense transforms the film into something else entirely”. Rave reviews contributed to her being asked to play the lead role in the Sth African produced horror film, ‘From A House On Willow Street’ which debuted at the 2016 Cannes Film Festival.

In need of an experienced athlete with parkour training, Vinson was chosen to appear as ‘the runner’ in an advertising campaign for Ben Affleck and Matt Damon’s new series, ‘The Runner’ on Go90. Seeking an ambiguous looking male or female to run around the building tops of Los Angeles, it was Vinson who beat out all the boys to acquire the physically demanding role.

In 2016, Rolling Stone listed ‘You’re Next’ as one of the “50 Greatest Horror Movies of the 21st Century”, citing Vinson as “one seriously ass-kicking horror heroine”. This captured the attention of Hollywood producer Adi Shankar (The Grey), who snapped up VINSON to star in his highly anticipated superhero series, ‘Gods and Secrets’. In the dark, controversial series, Vinson portrays the first female version of ‘The Flash’, in a role titled, ‘The Speed’. The show recently become the first independently produced series signed to NETFLIX, with season one coming to air in mid-2019.

In 2018, Vinson was hand picked by Channel 7 executives to join the new Australian dance series “Dance Boss”. Hosted by Dannii Minogue, the show made its debut in August, which saw Vinson as a judge on a panel alongside fellow dance icons Adam Garcia and Timomatic.

In early 2020, after 4 years in the making, Sharni completed filming an original tv series set to be released on Netflix later this year. In the yet to be titled dark superhero action/drama, Vinson plays the title female character, ‘The SPEED’, opposite Jane Seymour and Denise Richards.