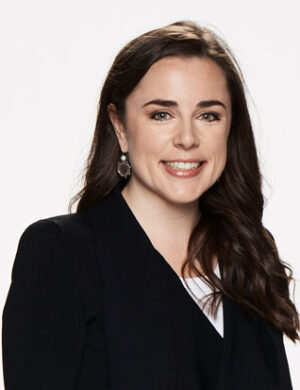 Sarah Olle is a Melbourne based sports journalist, boundary rider and host.

Best known for her work with Fox Footy, Sarah has hosted shows including The Weekend Lowdown and Speed Round, while also playing a major part in the channel’s AFLW coverage. A former panelist on Saturday Stretch, Sarah’s bubbly personality has led to other roles on Fox Footy, including coverage of the AFL draft and Rising Star Award. Sarah was also part of Fox Sport’s Big Bash League coverage of the 2019-20 season as a boundary rider.

Sarah has worked across a variety of mediums, including radio and print. She works with Triple M as a boundary rider for the AFL and was the fill in host for Dead Set Legends in 2019.

It was through the digital space, however, that Sarah was introduced to the industry, working with foxsports.com.au as an AFL, cricket and tennis reporter for four years. In that time, Sarah’s highlights included covering AFL and AFLW Grand Finals and awards, the 2016 Rio Olympics and several Australian Opens.

A passionate Sydney Swans fan and ambassador, Sarah has had a life long love affair with footy and has worked closely with the AFL to MC AFLW, VFLW and NAB League events.

Graduating from RMIT with honours in a Graduate Diploma in Journalism, Sarah also has a Bachelor of Laws/Arts from Monash University.

Had an absolute ball hosting the @aflwomens draft with @rileybev @_sjblack_ @natedwards33 and @bonnietoogood. Congrats to all the chickadees who realised their big and beautiful dreams. ...

New project coming soon! Fun way to ring in the birthday with Cal, Kouta and Ang. Re-living the ‘95 Grand Final. ...

What an honour (and also a 🐷 in 💩 moment). The Swans Hall of Fame Dinner was incredible. The dedication to the South Melbourne heritage, profound. Go Bloods 🥰 ...

Loved being part of the coverage for last night’s 2022 NAB AFL Mid-Season Rookie Draft. Hopefully another Marlion Pickett or Jai Newcombe from this crop 🤌🏼 ...