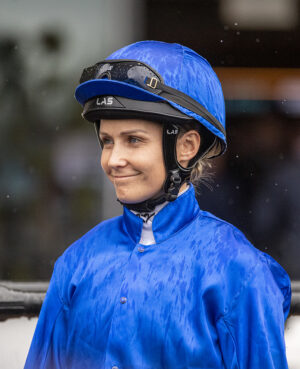 A horse lover from a young age, Rachel King began her career in the UK, riding as an amateur jockey for three years before coming to Australia for industry experience.

She initially intended to visit Australia for only a couple of months but fell in love with the country and is still here seven years later!

King completed her jockey apprenticeship with renowned racehorse trainer Gai Waterhouse. Her first professional race came in Sydney in 2016, before she joined the senior ranks in 2018.

At 24-years old, Kind was a relative latecomer to professional riding, but her talent shone through and she has steadily progressed into Australia’s elite riding ranks.

She has a number of significant achievements to her name already, including winning the 2017/2018 Sydney apprentice premiership, Group 1 success in the 2018 Spring Champion Stakes and in 2020 becoming the first female jockey to ride in The Everest.

King is a widely respected jockey and role model for the future generation of riders in the industry.