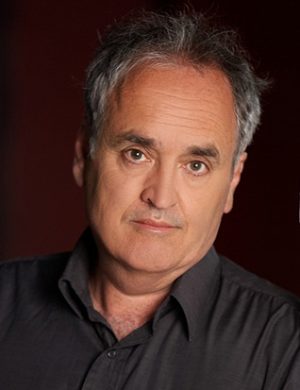 After many years as a nervous stand up artist, a bit part actor and an unfulfilled secondary teacher, Peter Moon became involved in a comedic group on Channel Seven called The 11th Hour which was the genesis of Fast Forward. He was a principal writer and performer on the show which ran for four years between 1987 and 1991 and was, in it’s heyday, the most popular show on Australian television.

His radio career started during the last year of Fast Forward on Fox-FM and this became the top FM breakfast show in Melbourne for a brief period. During this period, his material was syndicated across the Austereo Network all over Australia and he then joined Wendy Harmer and Paul Holmes on the 2DAY-FM Morning Crew in 1995 and for many years was consistently the top FM Breakfast show in Sydney.

In 2008/9 Peter wrote, produced and starred as himself in Whatever Happened to that Guy, a self referential take on the diminishing spotlight on a previously high profile comedian. His other TV credits include the sitcom Bligh on Channel Seven which he helped devise. Other credits include Underbelly, City Homicide, Neighbours, Tonight Live (Host), Hey Hey it’s Saturday and the feature film The Nugget.