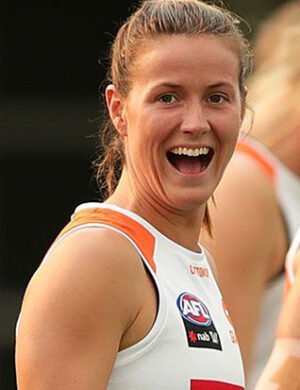 Nicola Barr was selected by Greater Western Sydney with the first pick in the inaugural AFLW draft in 2016 after being named the Mostyn Medalist as the Best & Fairest player in the AFL Sydney competition.

Barr earned a Rising Star nomination in her first season and has since established herself as one of the competition’s elite half-back flankers, known for her dash and accurate kicking.

Her excellent performance on the field also extends to her life off it. A high- achiever, Barr completed a Medical Science degree at Sydney University, while maintaining an AFLW career and work as a Pilates instructor. She also featured as an AFL Europe Ambassador during a recent trip to Europe, working with local teams in a coaching and mentoring capacity.

In her time away from work and study, Barr epitomises a healthy outdoor Sydney lifestyle. Utilising its beautiful beaches, she is an avid surfer, swimmer and runner and aims to soak up as much of the Sydney sun as possible.

When she’s not at the beach, she hits the road on her bike or can be found winding down in a yoga studio.

An eager traveller, Barr’s recent adventures have taken her through Europe, India, Japan and her own backyard, exploring the best Tasmania has to offer on her bike.

Barr’s actions reflect her philosophies of environmentalism and sustainability. She is undoubtedly devoted to getting the most out of life, constantly exploring, pushing and surrounding herself with positivity.