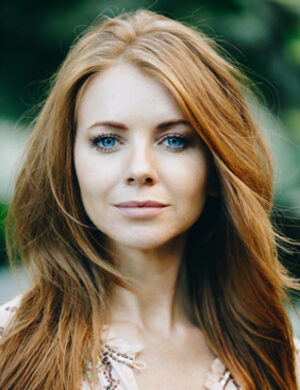 Lynn Gilmartin is an Irish-born Australian who has been globetrotting since 2009, immersing herself in the poker world as a player, television presenter and producer. Lynn has travelled through more than 30 countries, over 100 cities within them, and has plenty more to add to that impressive passport-stamp collection as the anchor of the World Poker Tour on FOX Sports (US), reaching approximately one million viewers per week.

Lynn has also added to her impressive array of credits in 2021 with the roles of Clementine in Christmas on the Farm (Hoodlum/Stan), Susan Storm in Gods Favourite Idiot (Netflix) and The Pirate Queen in Dive Club (Ten/ Netflix). In 2020 she played one of the leads, Gem in the feature This Little Love of Mine which has been theatrically released in Australia and internationally on Netflix, Gabby in the feature film Kidnapped and she also shot a recurring role in Neighbours.

A certified holistic health coach, Lynn shares her discoveries around living a healthy lifestyle, along with her travel adventures at LynnGilmartin.com.

So, here we are, two weeks before his first birthday with this finally happening… and I don’t know how I feel about it. 🥹 🙈 ...

Dreaming of dinner breaks at @kiyomi_gc, brunches at @nineteenatthestar and end of day mezcals at @veladora_gc (if you can find it 😉).

Swipe to see the full festival of events, including a fun new addition coming up on Tuesday — the $1k Mystery Bounty. Visit WPT.com for more info!

Have you heard about the launch of @WPTGlobal? 🌎 💫 🖥 I’ll be streaming my first time playing on the site (with my NFT avatar 😎) this Sunday, June 6th @ 6pm PST in my $10,000 FREEROLL. I’ll have a $1k bounty on me and if you win this freeroll, not only do you bank some cash but you will also receive a ticket to Phase 2 of the “Influencer Launch Event” on June 12th where you will face off against all the other “influencers” and their freeroll winners where…

Join me this Sunday on WPT’s Twitch account and on @WPTGlobal… Hopefully we can represent together in the big $100,000 on June 12!!!

🔺 Use code LYNN to register 🔺

(WPT Global is licensed to operate in ~100 countries and dependencies… Sadly that doesn’t include USA or AUS though. ☹️) ...