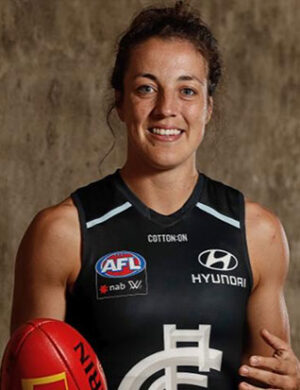 Kerryn Harrington has enjoyed a meteoric rise in the AFLW since being picked up as a rookie by Carlton in 2017.
In only her second season, Harrington was elevated to Carlton’s leadership group, finished third in the club’s Best & Fairest as a key defensive pillar and earned All-Australian honours. Following her breakout 2019 season, Harrington was named Co-Captain of the Blues for the 2020 season and continued her strong form as both a player and leader.

After completing a physiotherapy degree at La Trobe University, Harrington began work as a physio with the Carlton men’s team, making her the ultimate club captain.

Harrington also worked with the Carlton Football Club in developing community programs such as Carlton Respects, which looks to educate students about the importance of respect and equality.

Harrington has been a long-time professional athlete. As a 15- year-old, she earned a basketball scholarship to the AIS leading to World Championship appearances for the Australian Gems in U18s and U19s teams. She won two FIBA Oceania Under-18 championship gold medals and went on to have a ten-year, 150 game career in the WNBL, before making the switch to AFLW.

Her experience across two elite sports, high level leadership and professionalism make her a favourite among players and fans alike.