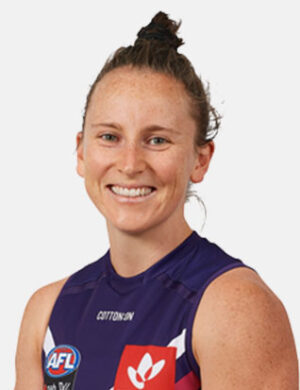 Now an AFLW superstar, Kara Antonio has long been a leader in women’s footy.

She represented Melbourne and West Coast in exhibition matches between 2013 and 2016, before being drafted as a marquee player by Fremantle in in the lead up to the inaugural 2017 AFLW season.

Antonio established herself as an elite midfielder as she was named captain, won Fremantle’s leading goal kicker award, earned All-Australian honours and was nominated by her teammates for the Most Valuable Player award despite missing the final game of the season with injury.

Antonio is also a passionate teacher with SEDA, has a level three coaching accreditation and is an ambassador for mental health organisation Tackle Your Feelings.

She thrives on helping people and looks to be a positive influence and leader for others.