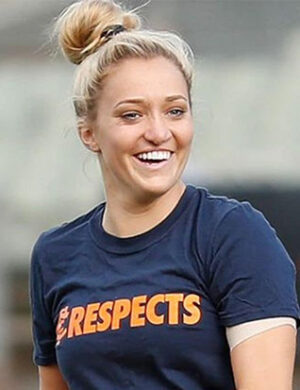 Jess Hosking was a steal for the Carlton Football Club, taken with pick 78 in the 2016 draft before the inaugural AFLW season. Hosking unfortunately had to wait until 2018 to debut for the Blues, having missed the entire 2017 season with shoulder and knee injuries.

She has since  gone from strength to strength, with her shift from the midfield to defence proving to be a masterstroke.

The former state netballer has overcome significant adversity, born with a cleft lip and palate, she has endured 17 surgeries and spent time in and out of hospitals throughout her childhood.

Hosking is heavily involved in off-field work as an ambassador for charities CleftPals Victoria and Interplast, supporting causes that are close to her heart.

She also works with not-for-profit organisation, Red Dust, and runs her own charity, 2 Boots, alongside her twin sister and teammate Sarah to assist remote Australian communities. Red Dust aims  to deliver health programs, while 2 Boots looks to repurpose and distribute football boots and runners.

Hosking is set to have another successful season off half-back in 2021.