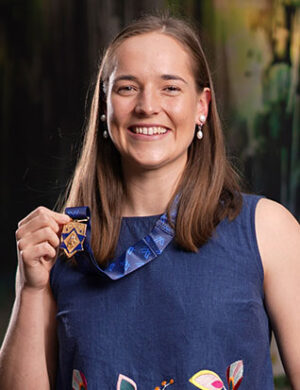 Izzy Huntington was drafted with pick 1 by the Western Bulldogs in the 2017 national draft.

Unfortunately, the Bulldogs had to wait to see the best of Huntington on the field with the star forward enduring a horror injury run. She only managed 5 games from her first two seasons, rupturing her ACL in 2018 before re-injuring the same knee in 2019.

Huntington made it well worth the wait for the Dogs with her move from the forward line to defence for the 2020 season proving to be a masterstroke.

The 21-year-old enjoyed a dominant year, ending the season equal first in contested marks and second for intercept possessions across the AFLW.

Huntington was also included in the Bulldog’s leadership group for the 2020 season highlighting the respect she earned from her peers while dealing with her injuries.

She was duly rewarded for her excellent form, named the 2020 AFLW Rising Star, won the Western Bulldogs Best & Fairest award and was named as an All Australian.

Huntington is as driven off the field as she is on it, studying science at university with hopes of becoming a doctor in the future. She was also nominated as the Western Bulldogs delegate during the AFLW CBA discussions prior to the 2020 season.

Away from the field and her studies, Huntington is an avid traveller, enjoying trips across the globe to Italy, Japan and a recent trip to Jordan among many others.