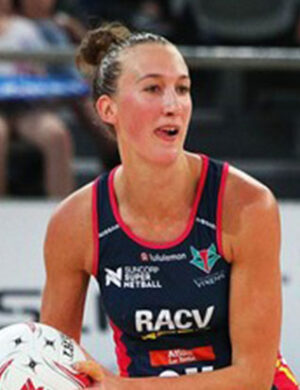 Emily Mannix is a star and vice-captain of the Melbourne Vixens, with the 24-year-old Goalkeeper a key to the team’s success.

She was runner up best and fairest in 2017, won the club’s coaches award in 2018 and recently signed with the Vixens until 2021.

Now in her fourth season with the club, Mannix is relishing the opportunity and challenge presented each week and is enjoying her new leadership role.

Mannix made her debut for the Australian Diamonds in 2017 and remains as an integral member of the squad today.

During her Diamonds experience she was fortunate enough to represent Australia both domestically and internationally, where she played in New Zealand, South Africa and England.

She was listed as a training partner for the 2018 Commonwealth Games which was an incredible honour and an experience she will never forget.

Emily grew up playing in the BFNL and the GFL whilst living in the small Bellarine peninsula town, St Leonard’s, where she still currently resides.