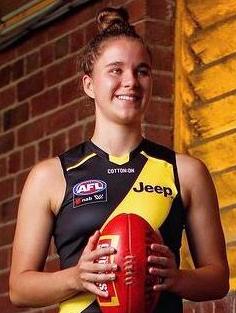 2020 number one draft pick Ellie McKenzie made a splash in her debut season, starring for the Richmond Tigers and quickly becoming a favourite of the yellow-and-black faithful.

McKenzie slotted into the Tiger’s side seamlessly, splitting her time between the midfield and forward line. She came second in the Best & Fairest and was nominated for the Rising Star award for an outstanding performance against Geelong in Round 5, where she collected 16 disposals, 5 marks and a goal. McKenzie also showed her pace burning past three Cats players with an eye-catching four-bounce run down the wing.

The 176cm star again showed her athleticism in Round 9, when she was nominated for Mark of the Year for her enormous specky against the Western Bulldogs.

McKenzie played a key role in Richmond’s much improved year, propelling them to three wins for the season. She has her eyes on helping the Tiger’s to their first ever AFLW finals campaign in 2022.