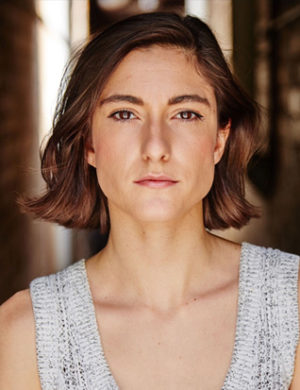 Diana Popovska is a Macedonian born, queer actor, filmmaker and theatre-maker living and creating on stolen Gadigal Land. Her work examines notions of culture, gender and explores the immigrant experience in Australia.

Diana studied at the Atlantic Theatre School in New York City under Chekov and Shakespeare genius Anya Saffir and founding member of Siti Company, Kelly Maurer. On film, Diana has been mentored by Baz Luhrmann and Miranda Tapsell during her leading role on THE PILGRIM REPORT, which had its premiere at the Sydney Opera House.

As a filmmaker, Diana has worked with Blunt Gorilla Production House and GoodStyle Productions. Diana has written and directed several short films and the award-winning short documentary, WHAT ARE WE IF DIFFERENT?, as well as releasing, PLANS, a seven-episode web-series which she wrote, directed, produced and starred in.

On stage, Diana most recently worked with award-winning director, Kate Gaul, where she played Marjory in the Sydney Premiere of Jen Silverman’s, THE MOORS. Diana also assistant directed for Gaul on Siren Theatre Company’s acclaimed production, PENELOPE. Diana’s theatre credits include: COWBOY MOUTH, which she produced alongside Nicholas Denton, METAMORPHOSIS, NEVER LET ME GO, THE HERO LEAVES ONE TOOTH, MACBETH and THE HYPACHONDRIAC.

Forthcoming, Diana has been confirmed as the 2021 Griffin Theatre Company Studio recipient.