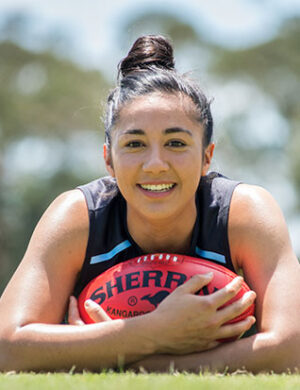 Darcy Vescio played in the inaugural AFLW season with the Carlton Blues as a marquee player signing making her debut in the historic first ever AFLW game, played between Carlton and Collingwood.

Vescio was named Player of the Week for her four goals on debut, kicking more than Collingwood’s entire score by herself.

At the end of the 2017 season, Vescio won the AFLW Leading Goalkicker award, the Mark of the Year award, was nominated by her teammates for the Most Valuable Player award and named in the All Australian side.

Throughout her career, Vescio has had some outstanding individual performances including her four-goals on debut, and a superb nine-goal haul in the VFLW against Essendon.

Darcy’s excellent on-field performances also extend into her off-field life. She works with a number of charities, organisations and brands on issues including multiculturalism and gender equality.

Her partnerships include Special K, Hyundai, Woolworths and Nike and she works with charities and organisations such as the Asia Society, has previously worked the Victorian Government and currently works with the AFL as a multicultural ambassador and is an ambassador for Maddie’s Vision. Darcy is also regularly outspoken on issues of gender equality.