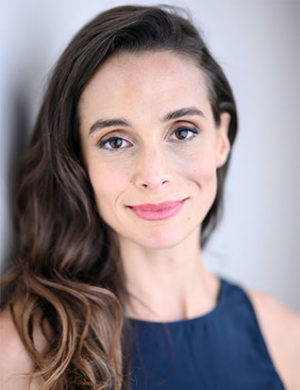 Claudia Greenstone is an Australian actress best known for her recurring role as Victoria Lamb on Neighbours.  She has had various roles in TV productions including Seven Types of Ambiguity, Upper Middle Bogan, Wentworth, Offspring, Killing Time and Satisfaction and has been blessed to work with some of Australia’s best and most exciting directors. Claudia is also an accomplished theatre performer with some of her favorite roles including Anna, from Closer (Patrick Marber), Helena, from Look Back in Anger (John Osbourne) and Dove in Features of Blown Youth (Raimondo Cortese), performed at the Arts Centre.

Whilst fulfilling her passion for acting, Claudia also studied Speech Pathology and specialized in English Pronunciation and Accent. She uses this knowledge and skill with accents in her work and, coupled with her mixed European background and ethnically ambiguous look, has been able to play diverse and varied roles including Russian, Serbian, Argentinian, French and Middle-Eastern.

As the first girl in the family following three older brothers, Claudia grew up in a family where karate was the name of the game. But when she came along she pirouetted and jetéd through the flying karate kicks and she started dancing and drama classes at an early age. She is also a huge lover of the beach, sun and sea so you won’t find her happier than playing in the ocean or upright on a paddleboard alongside her husband Guy! Two of her greatest achievements are her hilarious, cheeky and super sweet little girls, Frankie and Coco.