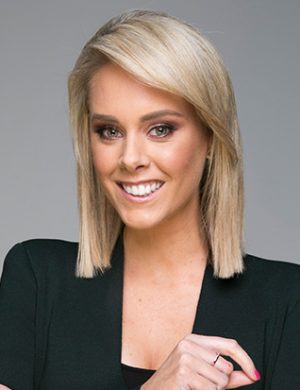 Candice Wyatt is an integral part of Ten Eyewitness News in Melbourne having taken on roles as News Anchor and as senior reporter covering international and local news stories.

She was born in Melbourne but grew up on a farm outside Warrnambool and decided at age 12 that she wanted to be a journalist. Her passion never waned and after finishing school she completed a Bachelor of Arts (Journalism) at Deakin University. Two weeks after graduating she picked up her first full time job as a journalist and never looked back.

Since then Candice has worked in newspapers, radio and television and cut her teeth in Melbourne as a crime reporter for Ten Eyewitness News.

During her career she has covered the Beaconsfield Mine Disaster, the infamous murder of Jill Meagher, the disappearance of flight MH370, chased drug smugglers to both Indonesia and Malaysia and filled in as a co-host of Channel Ten’s “The Project”.

She was the first to broadcast Shapelle Corby’s release from jail in Bali to Australia and was live on air for an hour in the lead up to her being freed.

Following on from that, Candice was rewarded for her body of work by being promoted to co-anchor of the Ten Eyewitness News Melbourne bulletin, alongside Stephen Quartermain in November 2014… But that hasn’t stopped her thirst for being on the road and telling stories.

She recently spent one month in Brazil covering the Rio Olympics for Ten Eyewitness News, working crazy hours and loving every single second.

Back home Candice is an Ambassador for Cure Brain Cancer Australia… A foundation started by the country’s top Neurosurgeon, Charlie Teo. In 2013 Candice lost her mother Karyn to this insidious disease after an horrific 6 month battle… which instigated her desire to raise awareness and campaign for funding.

Candice’s mother had just trekked Kokoda twice and was about to begin training for her first marathon when she was diagnosed with brain cancer. She was just 56, and Candice has learned to live a life without her… While carrying her legacy.

Socialising with friends and family and exploring Melbourne’s food and wine culture are some of Candice’s favourite things… She’s a passionate Essendon fan, loves to travel, keep fit and is never one to sit still.

Open
Something is Coming and we are excited... #Repost

Something is Coming and we are excited... #Repost @brookejowett
・・・
Something new is coming to KIC and I’m SO excited to officially announce that I’m the HIIT Master Trainer!!! You’ll be able to find me alongside @ellicewhichello on boxing and @brittactive on Strength!! Make sure you’re following the @keepitcleaner IG account to be the first to hear when my sessions are available! Not long to wait 😏#KICFIT ...

Open
State of Disaster... Not us!! Just as well we are

State of Disaster... Not us!! Just as well we are National so no disaster here. Business as usual... still accessible... still working... still being Covid ‘normal’. #CMC #Management #Sunday #Work ...

Open
Our John Wood... In this weeks @stellarmag #Repost

Our John Wood... In this weeks @stellarmag #Repost
・・・
While veteran actor John Wood has played many characters in his 50-year career, in the eyes of fans his most memorable has been that of Senior Sergeant Tom Croydon in popular drama series Blue Heelers. In an exclusive extract from his new memoir, the 74-year-old reveals his deep fondness for former castmates, why he never tired of portraying the same character for a dozen years – and how his father came to enjoy Wood's “eventual celebrity”. In today’s issue of Stellar, inside The Sunday Telegraph (NSW), Sunday Herald Sun (Victoria), The Sunday Mail (Queensland), Sunday Mail (SA) and Sunday Tasmanian (Tasmania). ...