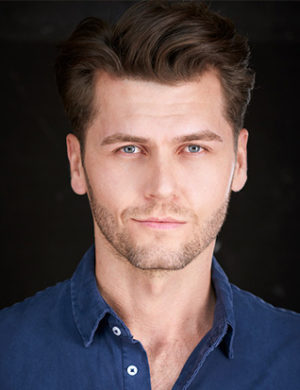 Byron Brochmann is an emerging actor who has successfully combined his background as a successful model, and as a crew member and stunt performer on big budget film and TV productions, and is steadily building a body of work as a lead actor in his own right.

He has just wrapped shooting on three projects, as Detective Joseph Gillott in the feature Dingo, the short film Mummy’s Boy in a lead role as well as on an online Comedy/Improv Series We’re All Learning.

Chosen by Robert Zemeckis to play a visual role alongside Brad Pitt in one of the most pivotal scenes in the film Allied was an incredible learning experience. He worked alongside Rachael Taylor, playing her love interest, Nils a Danish Olympian in Any Questions For Ben? Byron was also cast as the notorious, Ben Hall in Foxtels drama series Lawless: The Real Bushrangers.

Byron has also worked on productions in London & Australia, including Arifa where he plays

Constable Wilkes which was released in 2018. He also played the role of Victor Morgan on The Dr BlakeMysteries and has also finished a French co-production film, La Souffrance. Byron also has credited roles under his belt on Terra Nova, Kokoda and Fatal Honeymoon.

Byron has trained intensively with 16th Streets Kim Farrant (Strangerland). He has worked on major commercials for brands such as Apple, Novotel, Pimms & Domain. He also has weapons & military training and has stunt experience on Wolverine, HBO’s The Pacific, Battleground & Kokoda.