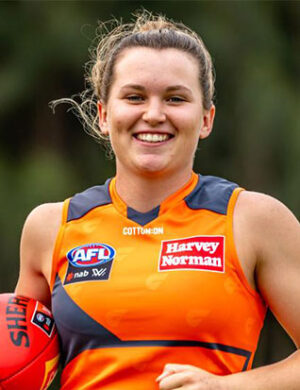 Drafted at pick 12 in 2018, Alyce Parker stamped her authority on the AFLW from the beginning, nominated for the NAB Rising Star award for her outstanding debut performance.

Already acknowledged as one of the best midfielders in the AFLW after her first season, Parker took her game to new heights in 2020 winning the GWS Giant’s Gabrielle Trainor Best & Fairest medal and earning All-Australian honours at only 19-years-old. She averaged an incredible 21 disposals at 61% efficiency from the midfield.

Her outstanding year was also acknowledged by Rebel Sport who presented her with the Rebel Young Leader award.

Parker is no stranger to individual accolades having been a two-time U18 All Australian including once as captain in 2018 for her standout performances for NSW/ACT and the Eastern Allies.

When Parker isn’t dominating on the field, she can be found enjoying her time at her family farm in Holbrook, NSW.