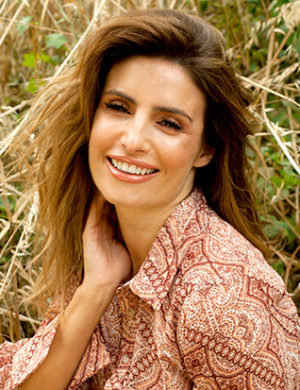 Ada Nicodemou is one of Australia’s favourite media personalities and for over 27 years has gained a solid local and international family audience. She is best known for her role as Leah Patterson on Channel 7’s longest running and highest rating series, ‘Home & Away’ on which she still stars.

Ada’s international credits include a role on the American television show Beast Masters and a cameo role in the blockbuster move The Matrix, starring Keanu Reeves.

Ada has been nominated for 5 Logie Awards and she won the 2006 Inside Soap Award for “Best Australian Actress”. In 2005 she starred on the popular television show “Dancing with the Stars” and took out the winning trophy. In 2012 Ada was the host of ‘Please Marry My Boy’ which aired on the 7 Network.

2021 will see Ada pick up her dancing shoes again to star in ‘Dancing with the Stars, Allstars’.

Ada has a massive online presence which is constantly growing. Through her online following and popularity, Ada has graced the covers of Stellar Magazine, WHO Magazine, Good Health Magazine and Body and Soul Magazine, to name a few. Ada is an Ambassador for Natures Way Collagen and has collaborated with brands such as Big W, Pears, Mattel, Cadbury, Officeworks, Optus & Priceline to name a few.

Had a lovely weekend away in nature 🌿🍁 now back to reality 😊 ...

I love dancing so much, definitely my happy place. So much joy 🤩 💃🏼❤️ @dancingau @aricyegudkin #dancingau ...